My sister had all of our family’s old 8mm home movies digitized. One of the early videos, from the early 1960s, opened on a historical marker, shown below in a screen capture from the video. This apparently was an earlier version of the more recent “This was his Georgia” marker in Harris County at the FDR overlook & favorite picnic spot. I am fairly certain this was from the same location on Dowdell Knob. 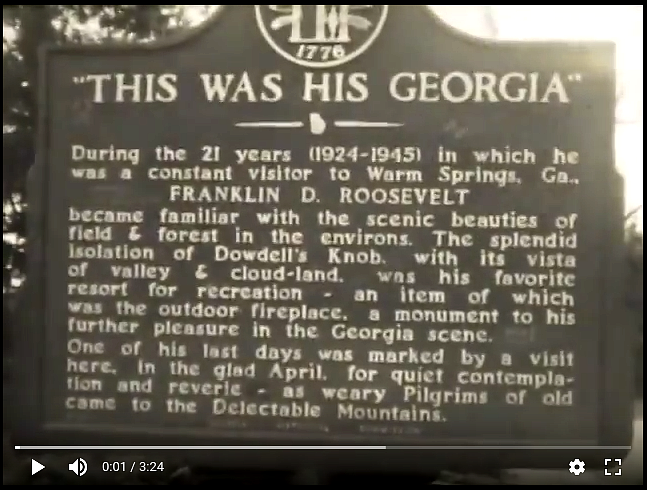 “THIS WAS HIS GEORGIA”

During the 21 years (1924-1945) in which he was a constant visitor to Warm Springs, Ga., FRANKLIN D. ROOSEVELT became familiar with the scenic beauties of field & forest in the environs. The splendid isolation of Dowdell’s Knob, with its vista of valley & cloud-land, was his favorite resort for recreation – an item of which was the outdoor fireplace, a monument to his further pleasure in the Georgia scene.
One of his last days was marked by a visit here, in the glad April, for quiet contemplation and reverie – as weary Pilgrims of old came here to the Delectable Mountains.1