A Guest Editorial in The GSU Signal – July 27, 1999
Earl A. Daniels  is a Signal staff member, and is majoring in sociology 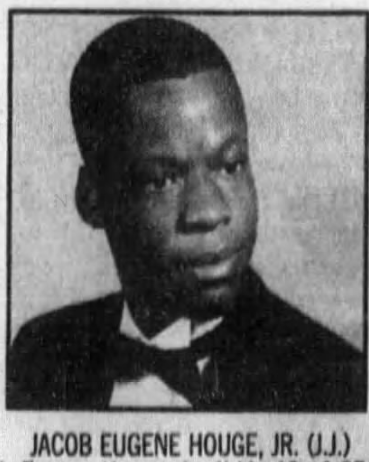 The GSU student was visiting friends at the Village. It was raining that Thursday afternoon, June 24. While running from the elevator near the “turnaround” to the Olympia Building. Jacob slipped and hit his head on a lamppost. Medical personnel later surmised that the second impact with the ground was the fatal blow.

A staff member and GSU police rendered first aid until the Grady ambulance arrived. He was pronounced dead at Grady Hospital a short while later.

Jacob had finished his freshman year in biological science. He was  19-years-old.

The event was described as a “freak accident.”

Upon hearing of this accident, many people responded with a spontaneous laugh that immediately embarrassed them. These are not insensitive people, or people who fail to see the tragedy of the incident.

Sometimes laughter is a defense mechanism in response to an event that hits just a bit too close to home. Almost all of us have run to avoid the rain, without paying close attention to where we were going. That is why Jacob’s death causes particular discomfort.

He was not “in the wrong place at the wrong time.” He was not the victim of some “bad guy.” He was visiting with friends. It is the type of incident that could happen to any of us without a moments’ notice.

Some might say “there, but by the grace of God, go I.” Such a statement asserts that God came up short in the grace department that day for Jacob. If such arbitrariness does operate the universe, that would in itself be as tragic as Jacob’s death.

The answer to the question “why?” has eluded philosophers and theologians for centuries. Do not expect the answer to be here in these words. Fortunately, the search for an answer is a useful exercise on its own, even though the definitive answers seem to be beyond us.

Attempting to understand is one aspect of the reaction to death. Worrying about death is another natural human process. While living life with prudence is advisable, fretting may not be helpful.

Mary Schmich offered some advice in her Chicago Tribune column that is now known as “The Sunscreen Speech.”

She cautioned against worrying, writing, “The real troubles in your life are apt to be things that never crossed your worried mind, the kind that blind side you at 4 pm. on some idle Tuesday.” Lampposts were probably not on the list of what worried Jacob. Moreover, it was 3:33pm. on a Thursday afternoon. Not knowing when or how we may die could be the basis for truly living our lives fully. Perhaps this is the lesson we can learn from Jacob’s death.

You do not know if you, or that person near you, will be alive at this time tomorrow. This uncertainty could be positive or negative.

It could prompt you to stop caring, or it could lead you to see that life is too short for much of our petty behavior. Do we really have time to hold grudges? Isn’t today the time to develop compassion for all the mortals around you? Will tomorrow be the day you tell someone those words they need to hear?

Sure, we cannot live as though we are going to die tomorrow. However, looking deeply at the truly precious and fleeting nature of life makes life even more precious and seem less fleeting.

As for Jacob, his life was precious, and his death tragic. We honor that preciousness when we mourn another’s death. We give all lives meaning by how we live ours.