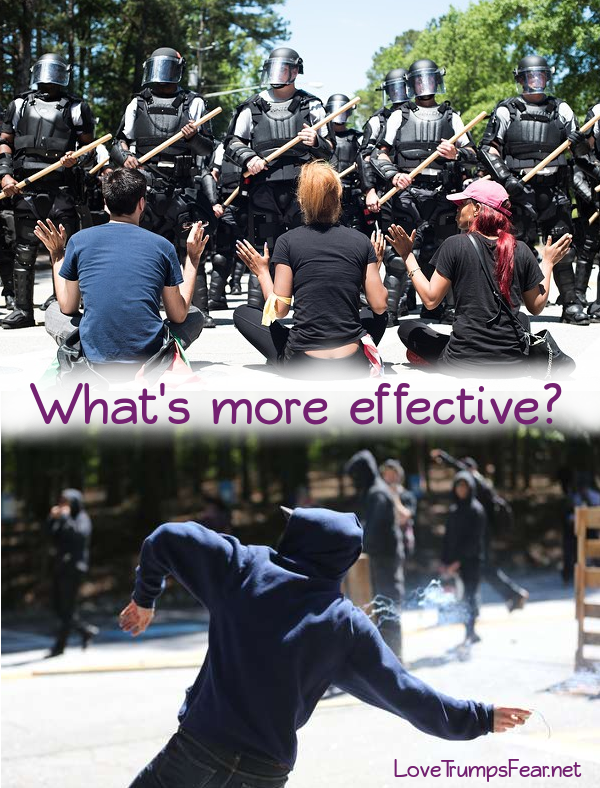 Photos from Creative Loafing and ajc.com

Oppression is a violation of human rights. No person has the right to act in a way that is intended to make others fearful of them. No one has the right to deny others the freedoms expressed in our Constitution. The white supremacists who gathered at Stone Mountain  on April 23, 2016, have oppressive racist views that go against American ideals. But how do we oppose them without becoming them? How do we exert our power without becoming oppressors?

I was at Stone Mountain to be on the side of love  with the anti-racists. But I was afraid of the very people I came there to love and support.  I saw extreme intolerant behavior from people with whom I mostly agree, except for the violence. I refuse to be a victim, and nobody did anything *to* me, yet I felt fear  that seemed oppressive. I am saddened by the counterproductive nature of the counter protest.

There are way too many cases of  police treating black people unfairly. There are many racist laws on the books and the police at times enforce them unfairly. The “war on drugs” IS a war on people of color. But the answer is not to wage a war on the police.

Can we  *really* stop police from shooting unarmed black men by throwing rocks and fireworks at them? Will we make the police allies by putting  them in the position where they must protect racist bigots?  Will we really get white supremacists to stop being afraid by threatening them? What would have happened if the if the police had stood aside? Would we lynch the racists?

We must win through Love.